In their role as supporter of local sports heroes, AA Drink was looking for a way to support local sports clubs during these difficult times. 🎾 ⚽ 🏑

Together we created the AA Drink Boost Your Sports Club campaign. In a period of 10 weeks, club members had the chance to collect AA Drink codes on AA Drink bottles and could nominate their club with these codes. 🎫 Each nominated club automatically received 5-10 Trays AA Drink at the reopening of the sports clubs, and the 40 clubs with the most nominations also won an extra AA Drink prize. 🎁

👉The result? A total of 490 clubs were nominated and received AA Drink products to sell in their club house! In addition, AA Drink obtained 85 new business leads out of the nominated sports clubs. 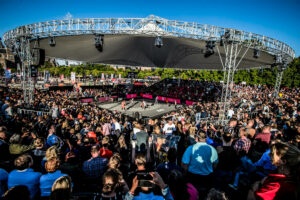